International Women’s Day, celebrated every year on March 8, is a global day celebrating the social, economic, cultural and political achievements of those who identify as women. The day also marks a call to action for accelerating gender diversity.

Gender diversity in tech has long been a point of contention, illustrated well by the divisive reactions to the 2017 memo circulated by a Google employee, who argued that biological and personality differences were the main drivers of the gender gap within the company.

History tells a different story. Many pioneers of the field were women. We see this as far back as 1843, when Ada Lovelace became the first computer programmer. However, as the societal perception of tech became more gendered in the mid-to-late 20th century, the narrative and stereotypes were rewritten to become more like what we recognize today.

There have been many women who have defied these harmful tropes to become leaders in their field. Doina Precup, who heads the Montreal office of Deepmind. Foteini Agrafioti, Head/Co-Founder of Borealis AI. And there have been promising initiatives to bring equity to tech. There is CAN-CWiC, toted as “the premiere Canadian computing conference for women in technology.” The Grace Hopper Celebration of Women in Computing continually breaks annual attendance records, bringing together over 20,000 people in 2018.

We are fortunate to have many fascinating and talented women to celebrate in the Amii office, including Anna Koop, Managing Director of Applied Science. Anna leads the applied machine learning team, monitors and directs the applied scientific endeavours of the organization, and facilitates interactions between our research core (Amii fellows) and industry partners. 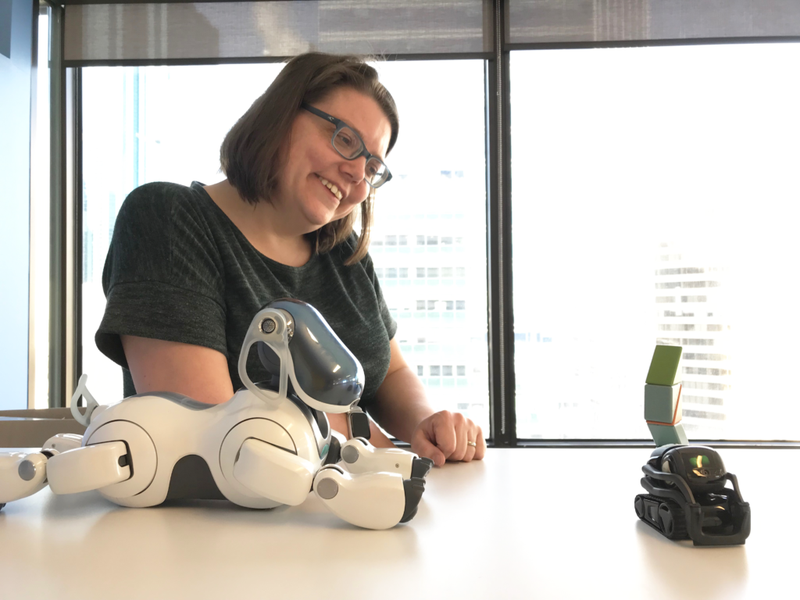 We sat down with Anna to ask her about what led her to her current position, and how her gender has affected her journey.

Please note: this interview has been edited and condensed for space

How did you get into researching machine intelligence?

In 2001, I went back to school to get my physics degree. I had done some part-time school, because you cannot keep me away from school — even if I’m in the middle of nowhere in Saskatchewan. I wanted to be a professor eventually, but since I had done some web programming, I did take one computers class. And in that class, Rob Holte let us know about the AI seminars, which were the weekly pizza lunches with guest speakers, students, and professors talking about AI. I started going to those out of curiousity, and found out that there was lots more to computer science than just programming the same task over and over again.

Amii, at the time, had just formed under the name Alberta Innovates Centre for Machine Learning. So now I’ve got to be talking about 2002. They were hiring for the summer, so I talked to them and got hired on to do some web dev. That turned into research collaborations with Rich [Sutton], and then I was hooked; I thought, “Okay, never mind. I can do cool things now. I am going into comp sci hardcore.”

That computers weren’t all artificial. I had a moment where I was very explicitly thinking, “You can’t do computer science without a computer, and so it’s less real in a way than physics. Physics is going on all around you.” But when I found out about the intelligence research, I thought, “Well, the nature of intelligence is a pretty fundamental question, yet we don’t get it.”

I remember tutoring a student in high school biology. She asked, “Okay, so here’s all these neurotransmitters. Where are our thoughts?” I said, “Don’t know. Isn’t that an interesting question?” And we still don’t know the answer, and that’s still a really interesting question. So that there’s this fundamental truth-of-the-universe question embedded in it; that we can use computers as a tool to discover this, is very exciting.

Computing science is also such a young field, and AI is especially young. There’s so much progress to be made everywhere, where on the physics side, it’s a lot harder and takes fancier toys to make progress. There’s so many nearer frontiers in comp sci. Although, to be fair, some of the intersect with philosophy that’s been going on for hundreds of years may be harder to make progress on.

You’re female in a field that has a known gender gap. What has your experience been in that sense?

I only noticed it a year or so into my masters, actually. There was a workshop for women in machine learning that my supervisor found out about, co-located with the Grace Hopper Celebration of Women in Computing. They were talking about the gender gap, which caused me to look around and say, “You’re right, there is. We have a lab of 30 people, I am one of two women. Those are not 51% of odds.”

And kind of exploring some of the less visible, less explicit consequences. I never had anyone tell me I couldn’t do science. But then you look around and realize that 10% of senior scientists are female, and you think, “Well, that’s weird. If there isn’t a gender bias, then what is going on here?” Then you start learning more, and realizing there is bias, it’s just more insidious than we’d like.

I do have colleagues who have been told that they can’t do it because they’re women, or they don’t look like a computer scientist. Even with that removed, there’s still differences in representation, so you don’t think of yourself as fitting into that role, or you think that it will take extreme efforts to be able to do it. Going to Grace Hopper was an eye-opening experience – there’s actual study around this, and empirical data, and it’s not about just what overt messaging is out there. It’s also about the systematic inequalities and how they’re reinforced. We got another group of women to go the next year, and then year after that. Then we started Ada’s Team, the Diversity in Computing Science Group, kind of in response to that.

It’s frustrating to notice. I was happier when it didn’t occur to me that often, because it’s all so, so stupid. The world is shooting itself in the foot. Even for totally selfish reasons, we should make sure we have diverse teams. [Editor’s note: see Why Diverse Teams are Smarter by Harvard Business Review]

Can you illustrate any specific moments where you’ve noticed that your gender has made a difference in your interactions with people?

I think I’ve been lucky, in that I haven’t had that many overt things. There’s just the pattern of feeling like I had more to prove, but you can always dismiss that. It can always be, “It’s not because I’m female, it’s because I’m doing something wrong, or because I’m approaching this in a different way. That’s why.”

The biggest one is probably the burden of being the explainer. I’ve been forwarded questions like, “Why do we need a scholarship for women?” Or, “Why do we need this celebration of women? Shouldn’t we be equal?” So doing a lot of the kind of one-to-one. Introducing concepts, hearing where they’re coming from, and explaining where we’re coming from, and it’s the same argument over and over again. So that gets tiring, but the worst drain is actually deciding when to take action.

For example, there was a game in the game development course where you’re playing as mean girls bullying students. And especially in CS, I’m not comfortable with this being condoned. So deciding to bring that up with the professor, and deciding to push on it when he didn’t see the issue. The pure emotional energy it takes to decide to have the conversations, to carry them out, and to deal with the aftermath when people especially don’t respond well – even when they’re very well intentioned – is just a huge recurring drain.

And it’s invisible, because sometimes ignorance is bliss. If you’re not seeing the problem, you’re not dealing with the ramifications. So becoming more aware has meant actually having a lot more time and energy routed to dealing with it, or trying to make it better, or addressing things that come up, or even being a shoulder to cry on when somebody else is dealing with it.

The other frustrating thing is the delayed reaction time. I’m very cheerful, generally speaking, and sunshine-y. My instinct is to smooth things over, and make everybody happy in the moment. And sometimes that means an hour later, I realize, “Wait a second, I’m furious. I shouldn’t have laughed at that, I should have yelled.” And then you have to decide whether to go back and make a big deal about it, and if so, how to.

I can’t even count up the hours that have been … Not lost, because it’s valuable work, but definitely not devoted to thesis work, because of dealing with this kind of thing.

If you had a piece of advice, or something to say, for future generations of women who are considering entering STEM, or who are presently in STEM programs, what would you say?

Keep growing in all the ways that appeal to you. Don’t feel like there’s only one narrow path, because it turns out, even the path you’re on is probably not the path you’ll stay on. There’s way more possibility in the world than we think about in high school. So pursue the things you’re interested in, and don’t stress about finding exactly the right fit or exactly the right career, because careers are changing all the time. Be open to hearing about other people’s experience; it broadens your world, it also gives you role models and resilience when you start hitting barriers, too. I wish I could go back and learn more about diversity and privilege as a teenager, and start applying it earlier. The broader perspective, that recognizing where you have privilege that others don’t, and where you have challenges that others don’t. That we’re all human and working on things together, I think, is a good way to go through life.

If you’re interested in STEM, go for it. Don’t feel constrained to it, and don’t feel constrained to any specific thing. Investigate all the things you like, and you’ll have some weird patchwork career in the end that integrates a bunch of your interests. I haven’t combined knitting and machine learning yet, but other people have, so it’s possible.

If you are a woman or gender minority who is practicing, studying or interested in the fields of machine learning and data science, support is available through WiMLDS groups. Visit the Edmonton and Calgary chapters for more information.

Over at Startup Edmonton, Operations Manager Lauren Briske shares some ways you can celebrate and get involved.

Visit internationalwomensday.com to learn more about International Women’s Day and how you can participate.