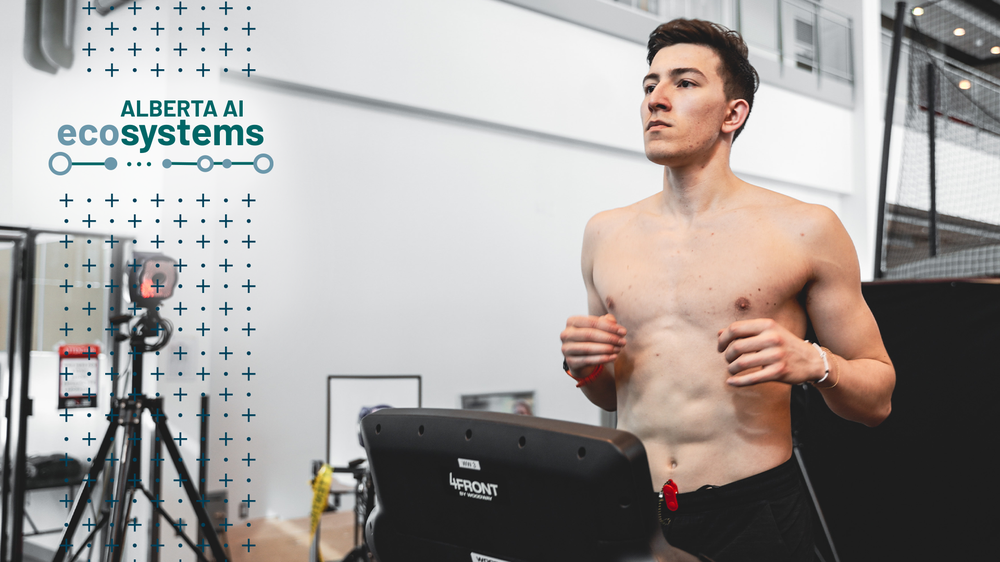 For an Olympic athlete, a few numbers can change their life. A fraction of a second or a couple of extra points can mean the difference between standing on top of the podium or watching from a distance.

But it goes much further than just the numbers on a scoreboard. Statistics and data collection have become a vital part of modern sports. Centres like the Canadian Sport Institute (CSI) Calgary use science to help Canada's Olympic and Paralympic athletes strive for gold -- and they're using artificial intelligence to do so.

"The role of science in sport is huge. And that's really the difference between a medalist and a non-medalist. Countries that are not using science are behind, and those that use it are the ones who are excelling," says Pro Stergiou, business development manager of Sports Product Testing at CSI Calgary.

In the 1990s, Canada was one of those countries that lagged behind in using a scientific approach to international sports. A desire to catch up to other countries led to the creation of sports institutes like CSI Calgary, which has a particular focus on winter sports. The non-profit offers training and mentoring to the country's top athletes, incorporating nutrition, biomechanics and sports psychology.

Part of that work involves collecting data. Over the past few decades, CSI Calgary has gathered a staggering amount of information from the athletes it has helped train. The centre's Sports Product Testing division, where Stergiou works, also studies the materials and equipment used in both training and competition.

Gathering all that data is one thing. Using it well is another. While CSI Calgary has done conventional data analysis on the information they've collected, Stergiou says much more is possible. So, they've turned to AI to unlock the potential hidden in the trove of data they've gathered.

The Sports Product Testing division is now using machine learning to investigate the importance an athlete's perceived comfort plays in high-performance footwear. This involves bringing athletes into their lab to gather a wealth of biometric data while training in specific shoes -- things like heart rate, joint movement, and how hard the athlete's foot is hitting the ground with each step. They'll also record the athlete's perception of the shoe, specifically whether the midsole feels too soft or hard during use.

According to Senior Research Scientist Christian Claremont, it is a lot of data to sift through. Machine learning will help them find patterns in the data they've collected, teasing out the most relevant biometric information that has the biggest impact on an athlete’s performance.

"Where machine learning is really handy is not only handling those large amounts of data. It's also able to extract meaningful data that may not be seen with the naked eye or some traditional measure," he says.

They hope to discover a link between the athlete's perception of the shoe and their performance while using it. It could help give invaluable insight into what equipment can help athletes perform at their best level or even give warning that a particular set of footwear might put an individual athlete at greater risk of injury.

"This is kind of that holy grail for the sports product industry ... that a particular product performs well or prevents injury for that particular consumer or athlete," Stergiou says.

"We could say, 'Oh, you would be best suited towards this type of shoe, or shirt, or jogging bra we know you would perform best in or be less likely to be injured in. We are putting them in a product that is made for them."

"Using that data to keep an athlete healthy, keeping them performing at their highest level – that's where I see AI helping in the future."

Looking towards the future

While this is CSI Calgary's first foray into using AI to find connections in the data it gathers from athletes, Stergiou thinks it is a sign of things to come. Projects like their study into footwear performance will help CSI Calgary lay a foundation for more artificial intelligence projects in the future.

Right now, Stergiou says the most important thing is to use AI to focus their data recording efforts. They have decades of information collected from thousands of athletes, but until now it has been impossible to fully understand which are the most important factors to focus on. Machine learning will finally allow them to zero in on the data most valuable to the athletes they work with.

Furthermore, he sees AI as a natural partner for another revolutionary advance in sports science: wearable technology. In the future, CSI Calgary may meet with athletes a few times a year to collect data and provide guidance, he says. By combining real-time information from wearable devices and the power of machine intelligence, he sees the opportunity to help athletes stay healthy and perform through every step of their training.

“Using that data to keep an athlete healthy, keeping them performing at their highest level – that's where I see AI helping in the future.”

The Project is an Alberta Artificial Intelligence Ecosystem Initiative supported by Amii and funded in part by Prairies Canada. The initiative brought together nine organizations from non-profit, business and academia to establish viable uses for artificial intelligence and machine learning in health and data analytics.

Interested in learning more about how Amii can help you harness the potential of AI in your business?

The first step is easy: contact us! We're here if you want to float an idea or to answer any burning questions you might have. We're always happy to chat with a fellow AI enthusiast (it's absolutely our favourite topic of discussion).

Synthetic fiber is everywhere. Learn how Canada-based Instrumar is using machine learning to improve quality and efficiency in fiber production.

EZ Ops: Using machine learning to get the most out of oil and gas wells

Clinisys EMR aiming for a collaborative AI revolution in healthcare